You are here: Home / Media / Press 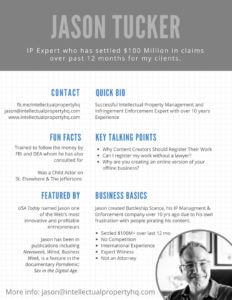 Jason Tucker, who USA Today named one of the Web’s most innovative and profitable entrepreneurs, has over 15 years’ experience in the online space coming over from mainstream Hollywood to the tech sector. He is the founder and managing director of Battleship Stance, a leading intellectual property management, enforcement and legal services company. Tucker manages a large portfolio of top-level domains and has managed, operated and sold premier membership sites and domain names. He is formerly the president and co-owner of Falcon Enterprises, which, at the time was one of the world’s largest libraries of images.

Under Battleship’s flag, Tucker serves as an IP consultant to some of the world’s largest film producers and distributors in both the private and public sectors. Due to his experience, Tucker has been in publications including Newsweek, Wired, Business Week, and is a regularly speaker on seminar panels relating to issues including content management, online piracy, and intellectual property protection.

Professionally, Jason’s expertise has been focused in the areas of online marketing and the identification, creation and management of otherwise technically complex business models.  Jason has served as a consultant specializing in the areas of viral marketing, peer to peer operations and digital rights management and as an expert witness in internet piracy cases.  His clients have included Microsoft Corporation for such projects as the rollout of Windows Media Player into the mass marketplace and the development, marketing and business model development for the Windows Digital Rights Management (DRM) Platform.  Additional clients have included Akamai Technologies, Williams Communication, and the RIAA.

In his philanthropic life Jason has been a volunteer with numerous worthy organizations including Special Olympics since 1982 serving on its State Games Committee for five years.  Jason has served over 6000 hours as a volunteer with Los Angeles County since 2001.  Jason is a certified FEMA Emergency Program Manager and is well versed in disaster management with an emphasis on streamlining communication for major incidents.  He has authored and instituted numerous training programs, taught by himself and others to agencies throughout the County of Los Angeles and created, developed, and executed the training protocols for and led the Rapid Response Team based at the LA County Emergency Operations Bureau.

Jason is a graduate of the FBI and DEA Citizens Academy and a member of InfraGard.  He assisted with the launch of the DEA Museum Target America and the creation of the DEA Citizens’ Academy Alumni Association.  His service and dedication has been acknowledged with awards from the State of California Senate, California Senate Public Safety Committee, FBI, DEA, LA Sheriff’s Department, American Red Cross, the City of Long Beach and the City of Carson.  Tucker was honored with the President’s Volunteer Service Award. 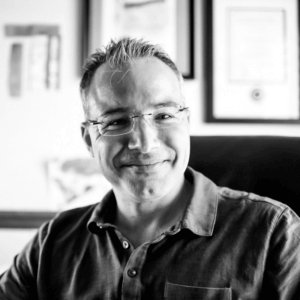